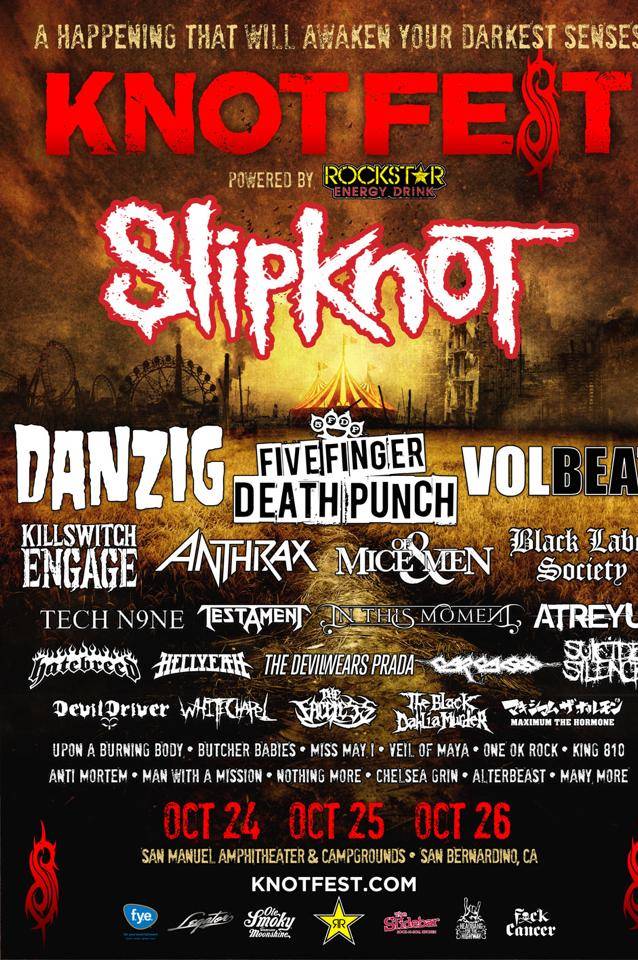 The second installment of SLIPKNOT‘s Knotfest on October 24-26 in San Bernardino, California The Iowa-based band will headline two nights (Friday and Saturday) of the event, playing a different set each night, with more than two dozen othe acts filling out the rest of the the three-day bill. The Friday night festivities will serve as a pre-party bash for fans who purchase VIP or camping packages.

Fans who purchase tickets to Knotfest will receive a digital copy of SLIPKNOT‘s new album when it’s eventually released.

As previously reported, 2014 will also see the debut of Knotfest Japan. Set for November 15 and November 16 at Makuhari Messe in Tokyo, Knotfest Japan will feature SLIPKNOT who performed at last year’s Ozzfest Japan, which drew capacity crowds and wide critical acclaim. The two-day music festival, headlined by SLIPKNOT on both days, will feature a mix of more than 20 international and Japanese bands.

“Knotfest is a chance for SLIPKNOT to bring the sensory-overload of a wild European festival — and now we’re coming for you, California,” says SLIPKNOT percussionist Shawn “Clown” Crahan. “Playing two different sets over two nights at one location is a new experience in the history of this band. This year’s Knotfests in the U.S. and Japan are going to be on another level.”

Knotfest in San Bernardino will feature performances by the following artists:

SLIPKNOT vocalist Corey Taylor told The Pulse Of Radio in 2012 that the idea for Knotfest had been in the works for a long time. “We’ve been talking about the concept of Knotfest for years. That’s something that we’ve been kind of throwing around since the ‘Iowa’ album cycle days. To be able to do it now, it was the time to do it. It’s obviously a passion project — we have no idea how well they’re gonna go, but at the same time, you know, this band has never shied from trying new things.”

Crahan said before the first Knotfest in 2012: “It’s all about having fun and bringing something to the world of rock ‘n’ roll, bringing it to the standard it used to be. It’s time for us to really engulf this idea known as Knotfest where we’re in control, we make a day devoted to our mindset, our ideas, the people that we want to play with, the people that we think our fans want to be around.”