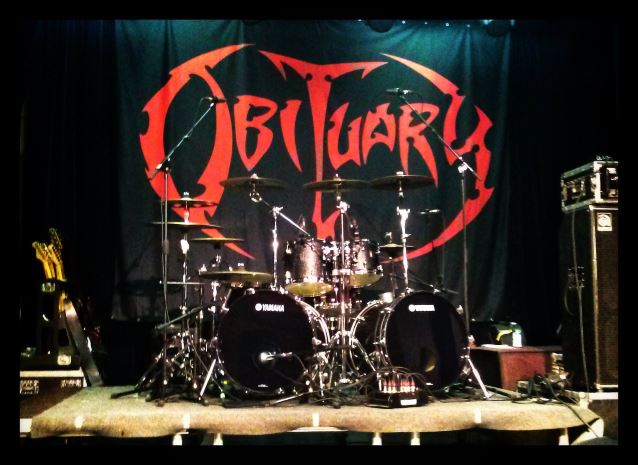 Florida death metallers OBITUARY have posted the following message on their Facebook page:

“This is a post that we hoped would never have to happen but we need to let our fans know the situation and hope that one of you can help us.

“[On] Saturday [July 26], at Stonehenge festival in Steenwijk, Holand somebody stole our backdrop. It happened right after our performance while we were packing up our equipment. Here is a photo of it so if you know who has it or think you might know anything about this, please helps us get it back! Can’t describe how important it is to us and it really sucks for the band and the fans these remaining shows to see OBITUARY without it hanging! Real bummer!!

“We are offering a reward to the person who helps us get it back. Please, let us know if you have any information about this.

As previously reported, OBITUARY has set “Inked In Blood” as the title of its ninth studio album, tentatively due at the end of October via the band’s new partnership with Relapse Records.

OBITUARY‘s first full-length CD in over five years was recorded by the band this past April at its own RedNeck Studio in Gibsonton, Florida. The album recording was funded by an extremely successful Kickstarter campaign in late 2013. Now the band has partnered with Relapse worldwide to maximize the release and impact of what is surely their heaviest and most cohesive record in 20 years.