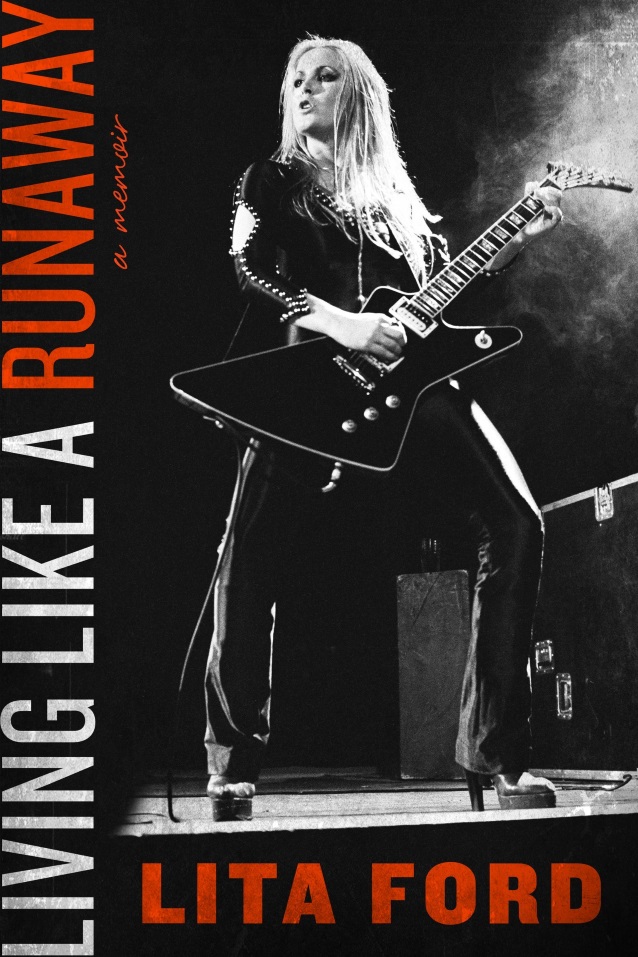 It Books, an imprint of HarperCollins Publishers, has set a November 11 release date for “Lita Ford – Living Like A Runaway: A Memoir”. In this 320-page hardcover book, the former lead guitarist of THE RUNAWAYS opens up about the ’70s and ’80s music scene, and her extraordinary life and career.

Lita Ford lived her dreams, until her life turned into a nightmare. She left home at age sixteen to join the world’s first all-female rock group, THE RUNAWAYS — a band whose legend was sealed by the 2010 hit movie starring Kristen Stewart and Dakota Fanning — and went on to become the first woman hard rock guitarist, a platinum-selling star who gave Ozzy Osbourne his first Top Ten hit, a bare-ass, leather-clad sexy babe whose hair was bigger and guitar licks were hotter than any of the guys. She is also the mother of two sons whose harrowing tale of her catastrophic marriage to a metal rocker makes Ike and Tina Turner sound like life at the country club.

But in the end, Lita‘s story changes from a music story to a woman’s story — a wrenching, desperate drama of human bondage and a mother’s love, a life-and-death struggle over her own soul. Trapped in an increasingly terrifying marriage, systematically stripped of her connections to the outside world, Lita Ford became a prisoner in her own life, a slave to her husband’s demands, living like a captive. She plotted her escape and her freedom cost her the boys she stayed in the marriage to protect. Her graphic, explicit story will terrify and horrify readers, but they won’t be able to put it down.

“Living Like A Runaway” will shock people with the candor that Lita Ford shines on her dramatic life story. At ease as a woman in the previously all-male world of rock, Lita shares with her male counterparts an unvarnished directness when it comes to topics such as sex, drugs, money or fame. No female rock star of Lita‘s stature has ever before told the real story of women in rock. With unprecedented rawness and honesty, “Living Like A Runaway” reminds us that Lita Ford is not only one of music’s greatest pioneers, but also one of its fiercest survivors.

In a January 2014 interview with PureGrainAudio.com, Ford stated about her upcoming book: “It’s an autobiography about, well, my life, the paths I’ve taken, all the different musical eras. It’s got all my favourite stories in it and we’re just working on getting that together. It covers everything really from me growing up to THE RUNAWAYS to Lita and all the things I’ve been through and experiences I’ve had.”

She added: “The hardest thing was how things kept popping out and I’m going crazy thinking, ‘Hell, I’ve got to include that… oh no… that needs to go in as well and… hey, do you remember that time…’ — every time I think I’ve got everything, one of us remembers something else and we’re back where we started. It’s never-ending.”