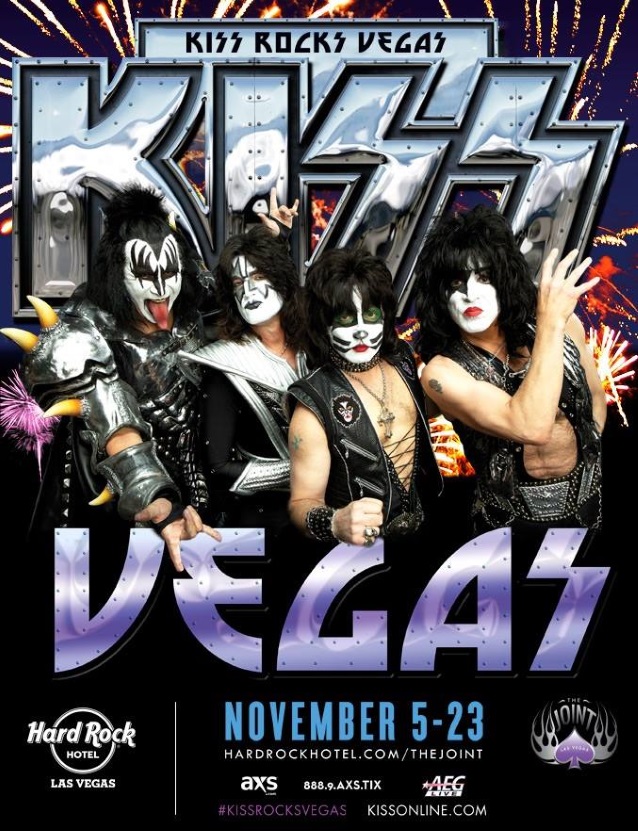 According to USAToday.com, the “Kiss Rocks Vegas” dates are:

Tickets for “Kiss Rocks Vegas” will start at $49.50 and go on sale Friday at AXS.com. Each performance will seat about 3,200.

“Whatever you’re used to with KISS, this will pump it up that much more,” KISS guitarist/vocalist Paul Stanley tells USAToday.com. “If KISS is on steroids, this is a double dose.”

“Usually, going into a smaller venue means eliminating things,” Stanley says. “The great thing about going into The Joint, it gives us the opportunity to add. Much in the same way as a Broadway show, when you have a permanent installation, you’re not breaking down every night to travel. So we can do things we wouldn’t normally do.”

KISS‘ stage show for the Las Vegas residency will include parts of the “spider stage” the band is using on its current summer co-headlining tour with DEF LEPPARD. “That being said, it’s not going to be that show,” Stanley says. “Here, we’re in the enviable position of being able to do a KISS show that we haven’t been able to do. We will pack 10 pounds of gunpowder into a 5-pound bag.”

“What happens in Vegas will not stay in Vegas, not if we have anything to do with it. We intend to blow the roof off the Hard Rock Hotel & Casino,” saysGene Simmons, founding member of KISS.

Adds Bobby Reynolds, vice president of booking for AEG Live Las Vegas: “KISS Army, get ready! America’s most iconic band is coming to America’s most exciting city. Rock And Rock Hall Of Famers KISS are bringing their show to Las Vegas for their first-ever residency.

“For 40 years, KISS has been putting on some of the most exciting shows in music and we finally got them where they should be — Las Vegas — at The Joint. We couldn’t be more excited to see what they’re gearing up for!”

The venue had been trying to book KISS for over a year, hotel vice president Chas Smith said. “The activation will encompass the entire property for the month they’re out here — from the performances onstage to wrapping the hotel with KISS stuff to having team members wearing KISS shirts,” Smith told USAToday.com.

DEF LEPPARD, MÖTLEY CRÜE and GUNS N’ ROSES have all completed successful Las Vegas rock residencies, with the latter two acts having already undertaken their second stints at the Joint.

Residencies enable venues to say they have established relationships with certain performers, who have often tailored shows specifically for the residency period.

DEF LEPPARD‘s 2013 three-week “Viva! Hysteria” run in Sin City included a performance of the band’s greatest hits, plus their 1987 album “Hysteria” in its entirety.

After weeks of bad-mouthing each other in the press, the four original members of KISS were inducted into the Rock And Roll Hall Of Fame in April by RAGE AGAINST THE MACHINE guitarist Tom Morello, with all four — Paul Stanley, Gene Simmons, Ace Frehley and Peter Criss — delivering warm, nostalgic and even sweet-natured speeches that put aside the simmering tensions for at least 12 minutes.

KISS did not perform — the Hall Of Fame wanted the original quartet only to play, while Simmons and Paul Stanley insisted on the current lineup — which also includes guitarist Tommy Thayer and drummer Eric Singer — performing as well. In the end nobody won that battle.