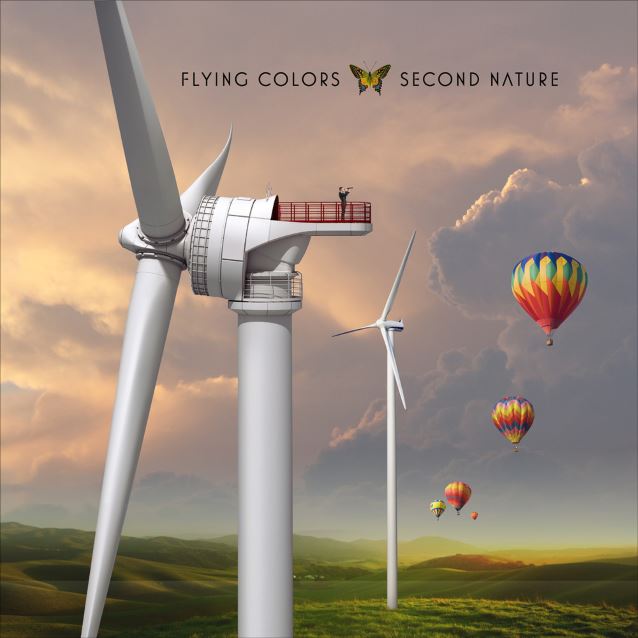 The music press acknowledged the eponymously titled debut album from FLYING COLORS among the most compelling releases of 2012. Executive producer Bill Evans assembled a team of virtuoso players, a pop singer/songwriter, and the right producer to create sophisticated music that was accessible. Over 100 singer/songwriters were considered for the role. Portnoy pitched the idea of approaching McPherson, a member of the group ALPHA REV, whose 2010 album called “New Morning” dominated the Billboard Top Ten for 17 weeks.

After an hour-long phone call with Evans, the band found their man. As Mike had quite rightly hoped, McPherson went on to prove the “X Factor” that elevated FLYING COLORS above the norm. “The idea of having an actual singer as opposed to a musician that also sang, really opened up a whole other world,” Portnoy told Prog magazine.

Classic Rock magazine hailed the band’s debut as “fearless”, praising its “JOURNEY-sized choruses” and referencing artists as diverse as THE BEATLES, RED HOT CHILI PEPPERS, THE DOORS, MUSE, and even Frank Sinatra. In late 2012, the band toured America and Europe, dazzling fans with FLYING COLORS originals and selections from the catalogues of the five members.

Schedules allowing, the protagonists had always viewed FLYING COLORS as a genuine band as opposed to a side project, hence they began writing a second studio album. From the first writing session to final delivery of the masters in July 2014, the process took almost a year and half, in four distinct stages: writing sessions via Skype in January/February 2013, another burst of writing and recording at Neal Morse‘s house in Nashville, a trip to Portnoy‘s home that spawned five additional songs, and finally individual recording/arrangement over the Internet throughout the spring of 2014.

This time the band opted to self-produce, with Evans, the man responsible for the concept of FLYING COLORS, reprising his role as executive producer and co-engineer. Besides offering a finely tuned set of ears, Evans would remix a track each time an amendment was made, before sending it onto each band member, allowing closer collaboration by the band. “There was no repudiation of producer Peter Collins,” clarifies Evans, “but the guys had become a family and they wanted to try something different.”

Sporting stunning artwork from the legendary designer Hugh Syme (RUSH, AEROSMITH, DEF LEPPARD, WHITESNAKE) and bookended by two tracks of truly epic stature — “Open Up Your Eyes” and the multiple-part “Cosmic Symphony” — the album is every bit as breathtaking as the debut. Portnoy stresses that the music’s proggier path was “not conscious at all.”

“Direction was never even discussed,” continues Portnoy. “We just did what we do. I think perhaps not having a producer to ‘trim the fat’ possibly led to the songs breathing and expanding a bit more.”

“This is an album full of many layers,” concludes guitarist Steve Morse. “The more you listen, the more you can hear. It’s an album to keep listening to.”

“Second Nature” showcases a compelling and thought-provoking collection of songs written and performed by musicians at the top of their game.